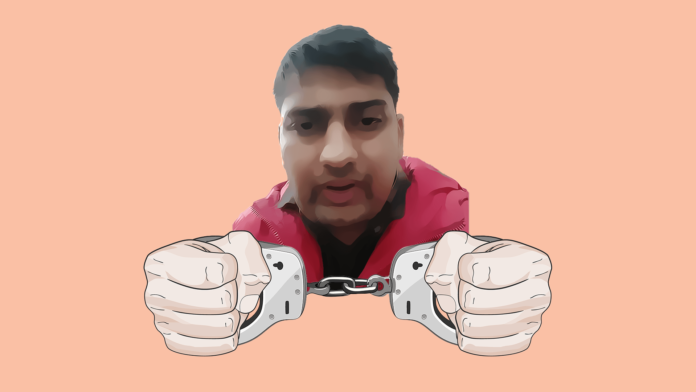 On Saturday, freelance journalist and contributor to Caravan magazine, Mandeep Punia, was arrested by the Delhi police. He was covering the farmer protests in Delhi, and was picked up from the protest site, along with another journalist Dharmendra Singh. While Dharmendra Singh was let off later after he showed his press card and signed an undertaking, Mandeep Punia was sent to 14-day judicial custody by the Metropolitan Magistrate Akhil Malik.

Mandeep Punia was covering the farmer protests happening in Delhi. Some people calling themselves “locals” had thrown stones and petrol bombs on the farmer tents on the Singhu border, after the tractor parade led to violent clashes between farmers and Delhi police. It was alleged that the police looked the other way when the mob attacked the farmer tents.

Mandeep was working on an article to figure out who were part of the mob that attacked the farmer tents. In one of his Facebook Live videos, he alleged that some people identified from the mob had links with the Bharatiya Janata Party.

While providing judicial custody of Mandeep Punia, the Magistrate asked to post the matter for a regular bail hearing on Monday before the court in Rohini. The case has been reserved for order for today, after both sides presented their cases yesterday.

The Delhi police claimed that Mandeep misbehaved with a constable and he tried to move across the barricades set up by them. They also alleged that Mandeep did not carry a press card that would have identified him as a journalist.

Mandeep Punia contended that he was only doing his journalistic work and nothing else.

The defence lawyer for Mandeep Punia argued that the First Information Report (FIR) was filed after a delay of seven hours. It was noted that both the complainant and the alleged victim in this case were police officers.

Mandeep contended in the bail plea that his family members were not informed about his detention until late in the night. It was also alleged that the contents in the FIR did not match with the video evidence available.

The bail plea also noted that Mandeep was a freelance journalist and hence he did not carry a press card. It was argued that not carrying a press card was not grounds for a case or arrest.