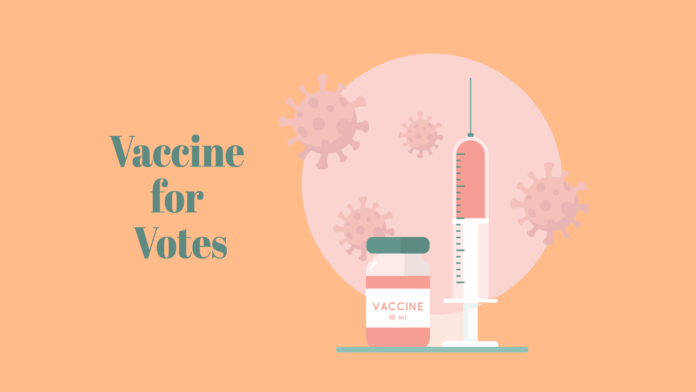 The Bharatiya Janata Party’s first promise in their manifesto for the upcoming Assembly elections in Bihar is to provide free COVID-19 vaccination to every person in Bihar. This announcement has come as a surprise with many questioning the timing and ethics of the poll promise.

Union Minister Nirmala Sitharaman, who unveiled BJP’s manifesto for the upcoming Bihar elections, said, “As soon as a COVID-19 vaccine is available for production at a mass scale, every person in Bihar will get free vaccination. This is the first promise mentioned in our poll manifesto”.

The actual wording in the manifesto reads (in Hindi), “In the fight against Coronavirus, Bihar’s NDA government has set an example to the entire country. It is our resolve that as soon as a vaccine against the Coronavirus is approved by ICMR, all people in Bihar will be vaccinated free of cost.”

Facing opposition from several quarters after the announcement, the BJP IT cell head Amit Malviya clarified in a Twitter post that, “BJP’s manifesto promises free Covid vaccine. Like all programs, center will provide vaccines to states at a nominal rate. It is for the state Govts to decide if they want to give it free or otherwise. Health being a state subject, Bihar BJP has decided to give it free. Simple.”

Noting that every political party goes into the election with a manifesto, BJP leader and Bihar in-charge for the party Bhupender Yadav told ANI that, “Someone talks about employment, someone talks about farm loan waiver, someone talks about permanent houses. Why is the Opposition upset if we are going with a public health issue? I don’t understand why the Opposition is criticising. The BJP has taken a great initiative. Health and public policy are never a poll issue and if the BJP is raising them then it is a step towards a positive politics.”

The Chief Minister of Tamil Nadu Edappadi Palaniswami announced that once the vaccine for COVID-19 is ready, it will be provided free of cost to all people of the state. The ruling AIADMK government in Tamil Nadu is an ally of BJP and is going to the polls next year. Shivraj Singh Chouhan, Chief Minister of BJP-led government in Madhya Pradesh, also tweeted that the Coronavirus vaccine will be made available to all citizens of Madhya Pradesh free of cost.

Soon after the announcement, Congress leader Rahul Gandhi tweeted that, “GOI just announced India’s Covid access strategy. Kindly refer to the state-wise election schedule to know when will you get it, along with a hoard of false promises.”

The Rashtriya Janata Dal, which is the main opposition party in Bihar, tweeted (in Hindi) that, “The Coronavirus vaccine belongs to the entire nation, not to BJP! Politics over the vaccine shows that BJP does not have any choice apart from selling the fear of disease and death. Biharis are self-respecting individuals, they don’t sell the future of their children for a few paise.”

The Indian Express quoted Chhattisgarh Health Minister TS Singh Deo (from Congress party) as saying that, “We have not been told anything by the Government of India about the purchase of the vaccine. It is not an issue if we (states) are asked to pay. If we have to pay, we will… but vaccines should be made available in proportion to the population. A vaccine cannot be assured for a particular state. The Election Commission should take cognizance of this announcement.”

“Will @BJP4India be paying for these vaccines from the party treasury? If it’s coming from the government treasury then how can Bihar get free vaccines while the rest of the country has to pay? There is so much wrong with this blatant populism that shamefully exploits COVID fears.”, tweeted former Jammu & Kashmir Chief Minister Omar Abdullah.

An article in The Wire quoted two former chief election commissioners on condition of anonymity that “Nirmala Sitharaman’s announcement of a free COVID-19 vaccine for Bihar would amount to a violation of the model code.” The article further stated that, “if it is indeed possible to supply vaccines for free, why is the government not resolving to do it already, and instead couching this offer in a quid pro quo arrangement? How can a party say it will deliver a vaccine – that its government at the Centre is anyway obliged to provide all citizens – only if people choose to vote for it in the state? And if the party loses, will a vaccine that could have been made available for free then carry a price-tag?”