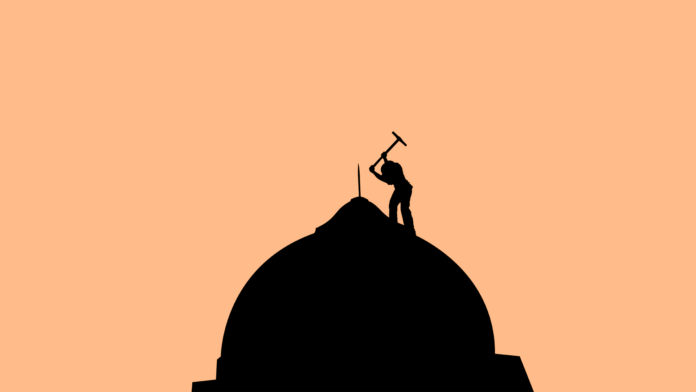 All 32 accused persons who were indicted for conspiracy to bring down Babri Masjid, including L.K. Advani, Murli Manohar Joshi and Uma Bharti, have been acquitted by the Special CBI Court in Lucknow yesterday. Special Judge S.K. Yadav said that there was no credible evidence against them to frame charges. We look at this judgement against the report submitted by the Liberhan Commission.

The Special CBI Court’s verdict, which is around 2300 pages long written in Hindi, said that all the evidence against the accused in the chargesheet were examined, but the alleged crime could not be proven.

The Special Judge said that there was no evidence to say the accused had planned the conspiracy with common intent. The verdict noted that a group of unruly kar sevaks from the main crowd got agitated suddenly and indulged in violence, even as VHP’s senior leader Ashok Singhal had appealed to them to retreat. The judge also pointed out the evidence suggesting RSS and VHP volunteers involved in taking care of arrangements for women, elderly and the media as proof of their non-involvement in the violence.

The Court observed that none of the 351 prosecution witnesses named any of the accused of demolishing the disputed structure. Some of the witness statements pointing out that the named accused exhorted the kar sevaks to demolish the mosque were found to be “not credible”. The Court reasoned that this was impossible to determine with the amount of dust inside the complex that was filled with lakhs of kar sevaks. The Court also found contradictions in witness statements with a few mentioning that the Katha Kunj dais from where the accused gave speeches was about 200-300 metres away, while others mentioned that it was about 800 metres away.

The material evidence submitted by the CBI did not stand up to scrutiny. The Court said that the newspaper clippings submitted were only hearsay evidence, while the interviews and statements of the accused published in newspapers could not be considered as evidence. Evidence from video cassettes was rejected after finding that they were not sent for forensic examination, while photographs could not be considered as evidence as none of the negatives were submitted.

The Liberhan Commission (Liberhan Ayodhya Commission of Inquiry), headed by Justice M.S. Liberhan, was set up on December 6, 1992 to probe the Babri Masjid demoition. 16 years later, the commission submitted its report to the then Prime Minister Manmohan Singh on June 30, 2009.

The Commission’s report noted that the finances for the entire movement were channeled from various Sangh Parivar organizations. The amount exceeding tens of crores of rupees were utilized for effecting the events of December 6, 1992.

The evidence led to the conclusion that “the mobilisation of the karsevaks and their convergence to Ayodhya and Faizabad was neither spontaneous nor voluntary. It was well orchestrated and planned. In conformity with the army-like discipline of the organisations like the RSS, the manner in which the arrangements and mobilisation was carried out does not corroborate the theory that the convergence or the mobilisation of such a large number of karsevaks was for symbolic karseva alone.”

Further, the report states that the “mode of assault, the small number of karsevaks who carried out the demolition and the constraints of the space to accommodate the number of people, veiling of the identity of the karsevaks entering the domes, the removal of the idols and the cash box from under the dome and the subsequent reinstallation in the make-shift temple, construction of the makeshift temple, availability of instruments and material for demolition and for the swift construction of the make-shift temple categorically leads to the conclusion and finding that the demolition was carried out with great painstaking preparation and preplanning.”

The report also noted that “lured by the prospect of power or wealth, a rank of leaders emerged within the BJP, RSS, VHP, Shiv Sena, Bajrang Dal etc. who were neither guided by any ideology nor imbued with any dogma nor restrained by any moral trepidation. These leaders saw the “Ayodhya Issue” as their road to success and sped down this highway mindless of the casualties they scattered about.” The Commission also criticized the then Prime Minister Narasimha Rao’s Congress government at the centre, noting that it “had been day-dreaming that the state government would go against its election manifesto”.

P.S. The verdict of the Special CBI Court can be accessed here (it is written in Hindi). The Liberhan Commision’s report (in English) can be downloaded here.