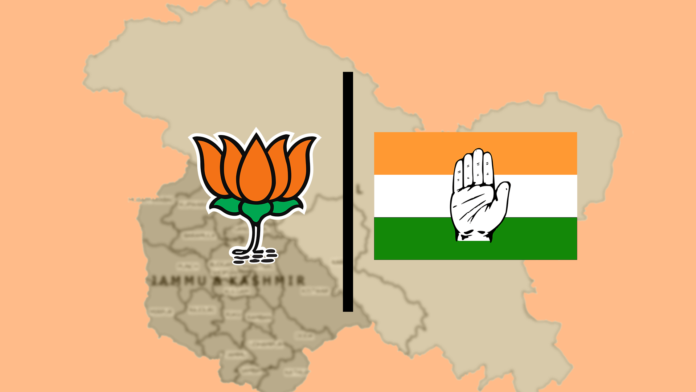 People’s Alliance for Gupkar Declaration (PAGD or Gupkar Alliance in short) was formed in October this year with the main objective of restoring the special status of the erstwhile state of Jammu & Kashmir. It is an alliance of 7 political parties in J&K – National Conference (NC), Peoples Democratic Party (PDP), Communist Party of India (CPI), Communist Party of India (Marxist), People’s Conference (PC), Jammu and Kashmir People’s Movement (JKPM), and Awami National Conference (ANC). PAGD is planning to contest the upcoming polls to District Development Councils across J&K. The BJP is accusing the Congress of endorsing PAGD’s views by allying with them for the elections.

Union Home Minister Amit Shah attacked the Congress in a tweet, saying “The Gupkar Gang is going global! They want foreign forces to intervene in Jammu and Kashmir. The Gupkar Gang also insults India’s Tricolour. Do Sonia Ji and Rahul Ji support such moves of the Gupkar Gang? They should make their stand crystal clear to the people of India.”

This attack from the Home Minister came after news about the Congress allying with PAGD was circulated. In its second list of candidates released for the DDC polls, the PAGD has provided 3 seats to Congress candidates from North and South Kashmir.

Union Law Minister Ravi Shankar Prasad questioned whether Congress endorsed PAGD’s position of restoring Article 370. He noted that Farooq Abdullah had no issues in seeking China’s help for restoration of Article 370, while Mehbooba Mufti had refused to hoist the Indian tricolour until the flag of J&K was restored. He said, “Sonia Gandhi ji and Rahul Gandhi ji, tell the nation clearly and categorically, does the Congress party want the restoration of Article 370 in the original form? Does Congress support the statements of Farooq Abdullah and Mehbooba Mufti? Congress should tell if they are with the stated objective of the Gupkar Declaration.”

The Congress party is known to have made several flip-flops regarding the situation in J&K. It was one of the signatories of the Gupkar Declaration last year, just before the Union government revoked the special status of J&K. But it did not formally join the PAGD this October fearing backlash from the public and accusations of BJP. Similarly, soon after Amit Shah’s accusations on Twitter, the Congress party strongly rebutted the claim that it was in an alliance with the PAGD. While the local J&K Congress unit have been in talks with PAGD for seat sharing, this rebuttal from the national level Congress leaders has seemingly confused the party workers and PAGD alike.

After Amit Shah’s tweet, Congress general secretary Randeep Singh Surjewala issued a statement categorically saying that the Congress was not in alliance with the Gupkar Alliance. He noted that the Congress was contesting the elections to District Development Councils so that the anti-people ways of BJP could be exposed in a democratic way. He also asked the BJP to explain why the Rashtriya Swayamsevak Sangh did not hoist the tricolour in the RSS headquarters for 52 years after independence.

Congress leader Kapil Sibal questioned why the BJP allied with the PDP in the past. In a tweet, he wrote, “Amit Shah alleges: Congress wants to take “J&K back to the era of terror and turmoil” when in talk with other parties in the upcoming District Development Council elections. Amitji, was BJP -PDP alliance to “bring back terror in J&K”?” Which gang were you then part of?”

Senior Congress leader Saifuddin Soz accused Amit Shah of showing India and its democracy in poor light. In a statement, he said, “It is really unfortunate that the Home Minister, Amit Shah, had to stoop so low and call the Kashmir Mainstream a ‘Gang’!” He has shown India and its democracy in extreme poor light when it called Kashmir mainstream’s togetherness as ‘Gupkar Gang’.” He also wondered why a democratic activity by mainstream political parties in J&K was being seen as a disruption by the Home Minister Amit Shah.

Although the BJP is accusing the Congress of allying with PAGD, the ruling national party is itself in a power-sharing alliance with National Conference (one of the parties in PAGD) in Ladakh region. During the Kargil Hill Council elections in 2018, the NC and BJP contested individually. But they formed an alliance later to administer the Ladakh Autonomous Hill Development Council, Kargil (LAHDCK).

P.S. Has BJP miscalculated the PAGD’s intentions regarding its participation in the DDC elections? The Print has an insight on this here.