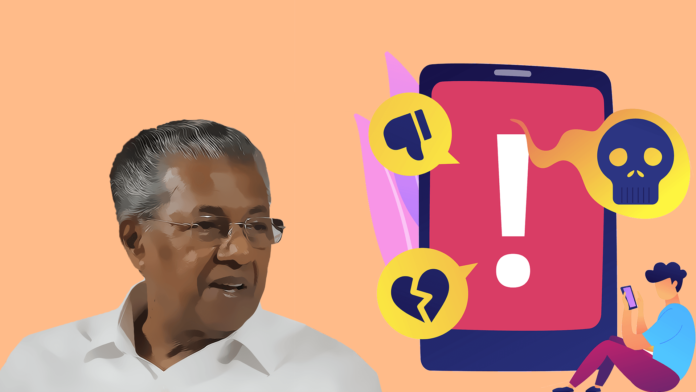 Kerala Governor Arif Mohammed Khan has signed an ordinance which seeks to punish people for posting threatening, abusive, and defamatory content through any mode of communication. The ordinance was recommended to the Governor by the Kerala Government led by Pinarayi Vijayan of CPI(M). The ordinance, known as ‘The Kerala Police (Amendment) Ordinance, 2020’, has raised concerns among the public and opposition parties.

The new ordinance seeks to incorporate Section 118A in the Kerala Police Act, which makes posting of intimidating and defamatory content punishable with imprisonment for a term up to three years and/or a fine of up to ₹10,000.

The provision in the new amendment states, “118 A. Punishment for making, expressing, publishing or disseminating any matter which is threatening, abusive, humiliating or defamatory ─ Whoever makes, expresses, publishes or disseminates through any kind of mode of communication, any matter or subject for threatening, abusing, humiliating or defaming a person or class of persons, knowing it to be false and that causes injury to the mind, reputation or property of such person or class of persons or any other person in whom they have interest shall on conviction, be punished with imprisonment for a term which may extend to three years or with fine which may extend to ten thousand rupees or with both.”

Kerala’s Chief Minister Pinarayi Vijayan has justified the ordinance saying that free speech or impartial journalism will not be affected. “The State Government was repeatedly receiving complaints against the wide misuse of social media, especially by certain online channels. Even prominent public and cultural figures had made such complaints. They have brought to the notice of the Government instances where inhuman and vile cyber-attacks were carried out by some in the guise of journalism and how it even harmed the family lives of many. It has often turned into targeted attacks using untruths and even sleazy content. Many families are bearing the consequences of such attacks,” he said.

Noting that protection of both individual freedom and freedom of the press is the government’s responsibility, he said the government is duty-bound to put measures in place against the infringement of personal dignity. He said, “Personal defamation and attack on dignity have even resulted in suicides and it has been brought to the attention of the Government by those in responsible positions. In such circumstances, the Government cannot simply ignore it. Our effort to ensure the respect and dignity of each individual should not create any apprehension in the minds of the media and the general public. The amendment only has clauses that are in tune with the sections that ensure the freedom of the press and individual liberty.”

Opposition to the ordinance:

Union Minister V Muraleedharan has condemned the move, saying “The ordinance giving arbitrary powers to police to arrest anyone for expressing their opinion is just draconian & goes against freedom of speech. By imposing curbs not just on social media but also on mainstream media, @CPIMKerala proved that they are autocratic & not suited for democracy.”

Congress MP Shashi Tharoor has also aired reservations. Saying that the development was ‘troubling’, he tweeted, “The law responds to several cases of offensive tweets/posts/comments abusing &threatening women, but it is so loosely drafted that it could also be used against political opponents, journalists & critics. This law can be challenged in court because any political attack on social media against a party or “class of persons” (e.g. “Sanghis” or “libtards”) could attract its provisions. It should be revised to apply to flagrant cases of abuse& threats only.”

Journalists from Kerala have also expressed their concerns. Speaking to The Print, Kerala Union of Working Journalists (KUWJ) president K.P. Reji said, “The government has been planning to take control of the media in the disguise of controlling cyber bullying. However, the amendment does not specifically mention cyber bullying but ‘mass media’. This means, all media fall under this purview.”

It must be noted that the Supreme Court had earlier struck down Section 66A of the IT Act along with Section 118(d) of the Kerala Police Act which contained similar provisions found in the current amendment. As The Wire notes, “Section 118D  of the Kerala Police Act made it an offence for any individual to cause ‘annoyance to any person in an indecent manner by statements or verbal or comments or telephone calls or calls of any type or by chasing or sending messages or mails by any means.’ The Supreme Court found that the impugned sections proscribed a range of acts if done via electronic means but did not define what terms like “intimidation”, “menacing”, “chasing”, “persistent” used actually meant.”

P.S. An opinion piece on Firstpost looks at why non-BJP states are leading the assault on Freedom of Expression. Read it here.