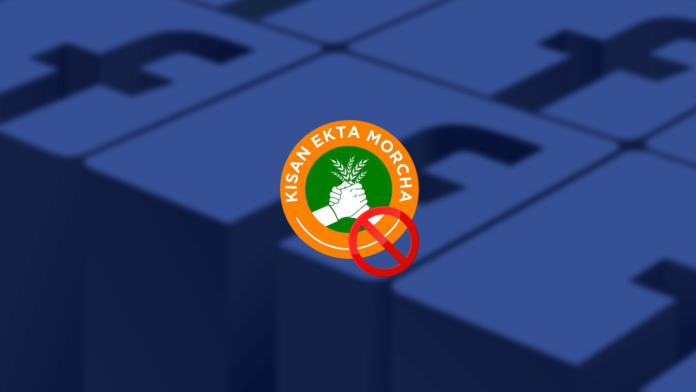 Yesterday, Facebook blocked the account of Kisan Ekta Morcha on its platform (both Facebook and Instagram). The action taken by Facebook was severely criticised by the farmers and farmer organizations who are protesting the new farm laws. The ban was lifted almost three hours later.

Kisan Ekta Morcha is a Facebook page created by the farmers protesting the new farm laws. In its ‘About’ section, the page refers to itself as the ‘Official Handle for Kisan Andolan’. The page contains several pictures and videos from the protest site near Delhi.

Farmers and farm leaders go live several times a day in the Facebook page, discussing their demands and countering government’s propaganda. The page was taken down in the middle of one such live event, wherein activist Yogendra Yadav was speaking.

Facebook has been under the scanner in India for some time now. There have been allegations that the company is favouring Bharatiya Janata Party (BJP) and the Union government to protect its business interests. Hence, this story is significant as it is being seen as Facebook suppressing the voices of the protestors.

Criticism for the ban:

Yadav’s twitter post also contained a screenshot (purportedly from Facebook) which read “Your page has been unpublished. This is because Kisan Ekta Morcha goes against our Community Standards on spam. We have these standards to prevent things such as false advertising, fraud and security breaches.”

The Internet Freedom Foundation (IFF), an organisation that aims to ‘protect and advance constitutional freedoms in a digital society’ in India, also criticised Facebook’s action. In a series of twitter posts, it wrote, “The action taken by Facebook to close the Kisan Ekta Morcha requires a close look at its content moderation practices and policies. India has close to 300 million Facebook users. Its largest market. Even then there is little transparency or accountability.”

Further, the IFF asked Facebook to “issue a detailed statement on how and why was the page of Kisan Ekta Manch [sic] unpublished. Second, it needs to provide a public commitment for a transparent human rights review as provided in the United States.”

In a series of tweets, ANI reported a detailed response from a Facebook spokesperson regarding the action taken by it (reproduced below):

Facebook created an independent oversight board, named Facebook Oversight Board (FOB), which can overrule Facebook’s decision to remove content from its platforms. Users can appeal against Facebook’s decision and the oversight board will determine whether the company was right in taking down their posts. The FOB recently took on six cases to adjudicate. Read about the cases here.