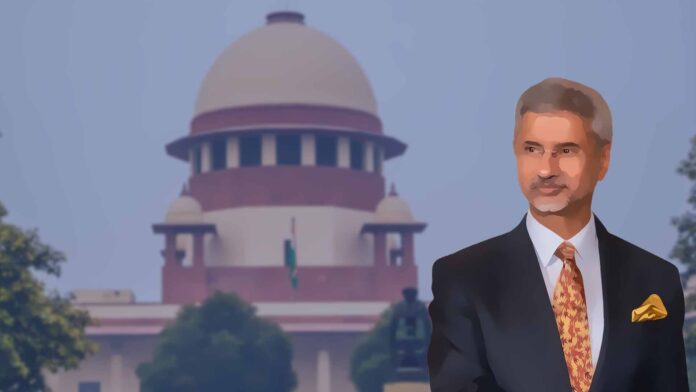 External Affairs Minister S. Jaishankar was elected as a Rajya Sabha Member of Parliament (MP) from Gujarat in 2019. But some Congress leaders have questioned the legality of his election. The Gujarat High Court, in February 2020, had dismissed the petition filed against Jaishankar’s election by Congress leader Gaurav Pandya. The case is now being argued in the Supreme Court.

S. Jaishankar, a career diplomat and politician, became the Minister of External Affairs under the Modi Government on May 31, 2019. At the time of his appointment, he was not an elected Member of Parliament. To continue serving as the External Affairs Minister, he had to get elected to either the Lok Sabha or the Rajya Sabha within six months from his appointment.

Two seats to Rajya Sabha from Gujarat became vacant, after the then Rajya Sabha MPs Amit Shah and Smriti Irani resigned as they both won the Lok Sabha elections. The Election Commission announced separate elections for the two seats. During the elections conducted on July 5, 2019, BJP nominees S. Jaishankar and Jugalji Thakor defeated Congress nominees Gaurav Pandya and Chandrikaben Chudasama, respectively. Both Jaishankar and Thakor were elected to the Rajya Sabha.

Allegations against the election:

Congress leader Gaurav Pandya had challenged Jaishankar’s election before the Gujarat High Court. In his petition, Pandya pleaded the court to hold the Election Commission of India’s (ECI) decision to consider the two vacant Rajya Sabha seats as different categories, leading to separate polls for both seats, as illegal.

He further asked the court to hold that “it is mandatory to hold joint election under single ballot allowing proportional representation through single transferable vote for both the seats having fallen vacant on account of the election of Mr.Amitbhai Anilchandra Shah and Mrs.Smriti Zubin Irani to the House of People.”

In simple words, Gaurav Pandya wanted the court to rule that the ECI’s conduct of the election was against the rules. As an article in India Today notes, “The Congress was eyeing to win one of the two seats from Gujarat if the elections were held together. The Rajya Sabha election is held on the basis of a single transferable vote. This means the MLAs are required to list their preferences if more candidates than one are to be elected. The separate election notification spoiled their chance of winning the Rajya Sabha bypolls.”

The Gujarat High Court referred to Section 147, among others, to arrive at its order. As per the Representation of People Act, 1951, an excerpt from Section 147 states –

When before the expiration of the term of office of a member elected to the Council of States, his seat becomes vacant or is declared vacant or his election to the Council of States is declared void, the Election Commission shall by a notification in the Gazette of India call upon the elected members of the Legislative Assembly or the members of the electoral college concerned 2[***], as the case may be, to elect a person for the purpose of filling the vacancy so caused before such date as may be specified in the notification and provisions of this Act and of the rules and orders made thereunder shall apply, as far as may be, in relation to the election of a member to fill such vacancy.

The Gujarat High Court noted that there is no “mandatory provision contained in the Act or in the Constitution to fill up all casual vacancies by a single bye­election.” The court further stated that the petitioner did not disclose the cause of action relating to grounds on which an election should be declared void (as provided in Section 100 of Representation of People Act, 1951).

Based on the above key observations, the court dismissed the petition.

P.S. Gaurav Pandya filed an affidavit in the Supreme Court against the Gujarat High Court’s order. The case is being heard by a bench headed by Chief Justice of India S.A. Bobde. It is an ongoing case, and the bench has scheduled the next detailed hearing in the third week of January 2021.