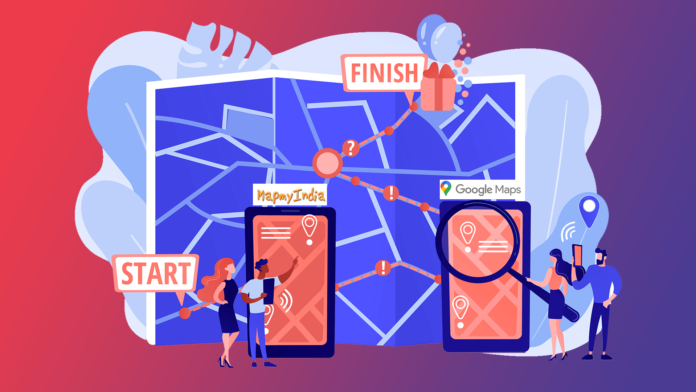 The Indian Space Research Organization (ISRO) recently announced a partnership with MapmyIndia (MMI), a home-grown digital map company. The Indian player plans to build an alternative to Google Maps in the country. We are delving into the specifics.

The ISRO-MMI joint initiative has come in response to the deregulation of geospatial data by the Indian government. Citizens can now look at detailed local maps and get real-time updates of on-ground happenings.

MMI aims to create geospatial software mapping portals, and apps utilizing ISRO’s repository of satellite images and Earth observation data. This indigenous project is being touted as the powerful player that will break Google’s supposed monopoly in the digital cartography space.

MapmyIndia was founded by Rakesh and Rashmi Verma back in 1995. Then, the company’s business was focused on the enterprise side: its clients included some of the top automakers like Tata, Honda, Toyota, and BMW. They entered the consumer segment of the mapping products with the Move app. When Prime Minister Narendra Modi called on Indian startups to devise innovative solutions under the Atma Nirbhar Bharat App Innovation Challenge, MMI’s Move app had emerged as one of the winners.

Now that the company is set to develop new mapping products with ISRO, we are looking at its competitiveness in the consumer space.

As per a statement, MMI will integrate its user maps, apps, and GIS services with ISRO’s catalogue to provide real-time traffic updates and enable safety-based navigation. The combined efforts of MMI and ISRO also have the potential to create a national powerhouse of hyperlocal discovery. Imagine a map search tool that is accurate down to the level of house numbers and extends across cities and villages of the country.

Currently, India’s mapping technologies have been heavily dependent on foreign resources, which often come with hidden costs (user-based ads) and privacy issues. With this in mind, MMI seeks to uphold national sovereignty and address ethical concerns. “MapmyIndia is a responsible, local Indian company that depicts Indian borders as per the government of India and hosts its maps in India,” said CEO Rohan Verma. He also claimed that the new ‘Bhuvan’ app will have enhanced privacy-centric features.

Can this app challenge the position of giants like Google? There are several points in MMI’s favour. For one, it has been around for over two decades, building a sustainable map business, raking in cash reserves, earning profits,  and giving good returns to investors. Then, it has already mapped about 7500 cities, 7.5 lakh villages, and 63 kilometres of road network across the length and breadth of India.

Still a long way to go:

For now, neither ISRO nor MapmyIndia have declared any timeline for the rollout. When the project does get implemented, however, its success will depend on multiple factors.

Anticipating how the contest between MMI’s initiatives (Move, Bhuvan, and others) and Google will play out, one wonders whether the latter’s head start in the consumer segment will benefit it. Google Maps and Google Earth have Alphabet Inc supporting them, which comes with deep pockets and loads of data.

When MMI introduced the Move app, the  number of downloads were about a 100 times less than the total Android users, who get Google Maps pre-installed in their devices. Another challenge would be to change behaviour. Due to force of habit, developers, car aggregators, drivers, and end-users may be more comfortable with Google’s existing offerings.

Additionally, companies like Lyft and Uber have integrated Maps into their applications, and they mine customer data to provide better services. Even at the user end, some experts believe that privacy may not be reason enough for users to switch to MMI’s product.

So, to fight against Google’s map products, the company will have to build a comprehensive navigable map with intuitive tech and offer local language support. These capabilities can make a difference on the ground. Otherwise, the gap – to reach the public at large – is huge.