Is Owaisi’s AIMIM a B-team of BJP? 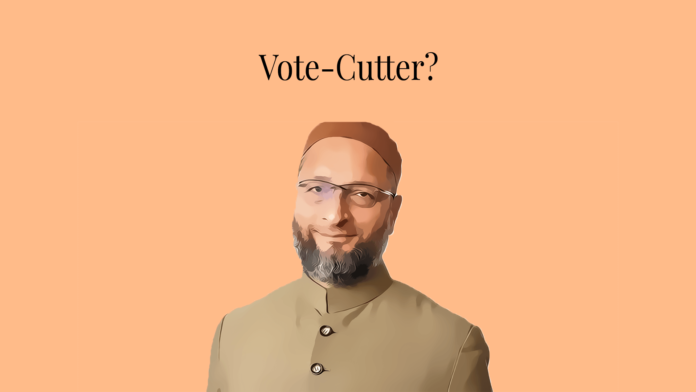 The exit polls for the 2020 Bihar Assembly elections had predicted a landslide win for the Mahagathbandhan (an alliance of Rashtriya Janata Dal, Indian National Congress, and the Left parties). But the ruling National Democratic Alliance (an alliance of Janata Dal (United), BJP and others) sprung a surprise and won the elections despite RJD emerging as the single largest party. The defeat of Mahagathbandhan is attributed by political observers to the dismal performance of Congress, which won only 19 of the 70 seats it had contested. The Congress and RJD, however, pointed fingers at Asaduddin Owaisi’s All India Majlis-e-Ittehadul Muslimeen (AIMIM) for its poor performance.

AIMIM is the B-team of BJP:

AIMIM had contested in 19 seats, of which 14 fell in the Muslim-dominated Seemanchal region in Bihar. The region has a 47% Muslim population, compared to the Bihar state average of 17%. Traditionally, Muslim votes in the region were bagged by the Congress and its allies. However, AIMIM seems to have eaten into their vote-share during the current election.

Congress leader Adhir Ranjan Choudhary accused the BJP of being the mastermind behind the AIMIM’s performance in Bihar elections. In an interview, he said, “BJP’s tact of using (Asaduddin) Owaisi sahib’s party in the Bihar elections has succeeded to an extent. All secular parties should be alert about vote-cutter Owaisi sahib.”

Senior RJD leader Shivanand Tiwari called Owaisi’s AIMIM as the B-team of BJP-RSS. He said, “Where there is election, especially in Muslim dominated areas, Owaisi fields his party’s candidates. Why? Despite knowing that he will not be able to defeat the BJP-RSS or will be able to form the government, he fights. Because his purpose is to further the BJP-RSS agenda.”

It must be noted that the Congress spared no efforts in targeting AIMIM and its leader Owaisi during the campaigning for Bihar elections. In an interview to India Today, Congress spokesperson Randeep Singh Surjewala said, “Owaisi doesn’t criticise Nitish Kumar or Sushil Modi, he targets Congress and RJD, whenever Modi ji is in trouble, Owaisi comes to his rescue, AIMIM and RSS are two sides of the same coin, both do communal politics, BSP is supporting BJP in Uttar Pradesh, BJP is giving Rajya Sabha seat to BSP, and here AIMIM and BSP are opposing Congress & Tejaswi. They have come to help Nitish and Sushil Modi, so they are C team of BJP, but people understand this very well.”

In an interview to NDTV, Asaduddin Owaisi claimed that none of the big political parties wanted to ally with AIMIM. “In politics, you learn from your mistake. Our Bihar chief personally met with each and every leader of political parties. No one was ready to touch us. Big parties treated me like an untouchable. Our party president met every important Muslim leader as well. But nothing worked out. Cannot tell you why it didn’t happen,” he said.

On the Congress calling AIMIM the B-team of BJP, Owaisi said, “They are trying to hide their frustration. If they are defeated, they blame Owaisi. We started our Bihar journey five years back. We have worked for development of Seemanchal. We will decide later who we will support. Our fight for justice for Seemanchal will continue.”

In another interview with The Quint, Owaisi also took a jibe at secular political parties, saying, “Those who call themselves secular have a long story of deception and back stabbing. What did you give in the name of secularism? You just gave them fear. Now, no vote would be cast on the basis of fear, votes will be cast for a new hope.”

An after-poll analysis on The Quint claimed that the ‘vote-cutter’ charge on AIMIM is not backed by data. The article defined a vote-cutter party as one which “secures more votes than the margin of defeat in a particular seat and if its base is similar to that of the defeated candidate.” But in this election, the votes polled by AIMIM “was more than NDA’s victory margin only in one seat – Raniganj. And that too by only 108 votes.”

P.S. An article on NDTV highlights the importance of allying with parties like Asaduddin Owaisi’s AIMIM for the success of India’s opposition parties. Read it here.