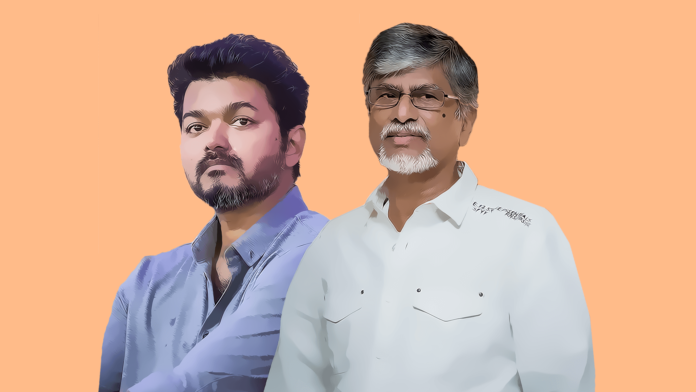 Last week, news emerged that a political party has been registered with the Election Commission of India in Tamil actor Vijay’s name by his father SA Chandrasekhar. News about creation of the party, named “Akila India Thalapathi Vijay Makkal Iyakkam”, raised a lot of buzz in Tamil Nadu.  However, initial excitement among his fans later turned into confusion as Vijay publicly disavowed the political party.

Actor Vijay’s recent movies are littered with political references and messages. So, his political aspirations are no secret. He has a significantly large fan base in Tamil Nadu, arguably next only to Superstar Rajinikanth’s fandom. However, there was no expectation that he would plunge into politics any time soon.

‘Thalapathi’ Vijay, as he’s affectionately called by his fans, released a press statement distancing himself from the actions of his father. His press release is reproduced below (translated from Tamil):

“Today, I came to know through news reports that my father SA Chandrasekhar has formed a political party. I would like to inform my fans and the public that I am not involved either directly or indirectly in the political party started by him.

Appropriate action will be taken against those who engage in any activities by involving my name, photograph or the name of my organisation ‘Akila India Thalapathi Vijay Makkal Iyakkam’.”

Tamil Nadu Legislative Assembly Election is set to be held in May 2021. So, the move by SA Chandrasekhar has caught everyone by surprise, including his own son actor Vijay. The move seems to have strained the relationship between father and son.

In an interview with News18, SA Chandrasekhar justified his decision to start a party in his son’s name without the latter’s consent. He said that he had started Vijay’s ‘Rasigar Mandram’ (Fans Organisation) in 1993. He also claimed that starting a political party did not mean that it will contest in elections. Instead, it was just a way to recognize the social work that was being done Vijay’s young fans and enable them to continue doing so.

P.S. The Indian Express has carried an interesting article on whether Vijay is trying to emulate MG Ramachandran (former Chief Minister of Tamil Nadu who was also a famous actor). Find it here.