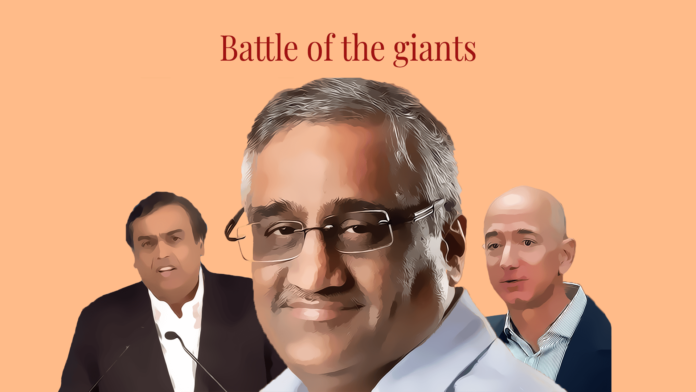 In August this year, Reliance Retail Ventures Limited (a subsidiary of Reliance Industries Limited) entered into an agreement with Future Group’s Future Retail Limited to acquire the latter’s retail, wholesale, logistics and warehousing units for ₹24,713 crore. Amazon objected to the deal saying that it was in violation of its contractual rights. Amazon won an interim injunction from the Singapore International Arbitration Centre (SIAC) where it had filed a case against Future Group over the deal. But Future Group has said that the deal will happen despite the order from SIAC, as its order was non-binding under Indian laws.

In August 2019, Amazon made a deal with Future Coupons, which is an unlisted company of the Future Group. Through the deal, Amazon had acquired a 49% stake in Future Coupons for a consideration of around ₹1,400 crore.

The deal between Amazon and Future Coupons also had a non-compete clause. “Amazon’s shareholders’ agreement with Future Coupons had barred not just Reliance Industries but tens of companies including Walmart, Google and Zomato from buying into Future Group’s retail assets. The US ecommerce giant had explicitly named 15 global and local firms including Walmart, Alibaba, Softbank, Google, Naspers, eBay, Target, Paytm, Zomato and Swiggy as parties which cannot buy shares or stake in Future Coupons (FCL), a holding company of Future Group, according to Amazon-Future Retail shareholder agreement submitted to the Singapore arbitration court. In addition, anyone engaged in online or offline retail of either food or non-food in India or globally was barred from buying into FCL,” noted an article in The Economic Times.

In one of its stock exchange filings, Amazon noted that “As part of the agreement, Amazon has been granted a call option. This call option allows Amazon to acquire all or part of the Promoters’ shareholding in Future Retail Limited (Company), and is exercisable between the 3rd to 10th years, in certain circumstances, subject to applicable law.” It further stated that the promoters of Future Coupons have “agreed to certain share transfer restrictions on their shares in the Company for same tenure, including restrictions to not transfer shares to specified persons, a right of first offer in favour of Amazon, all of which are subject to mutually agreed exceptions (such as liquidity allowances and affiliate transfers).”

In a statement given to BloombergQuint after the SIAC ruling in its favour, Amazon said it welcomed the decision of the arbitrator. “We welcome the award of the Emergency Arbitrator. We are grateful for the order which grants all the reliefs that were sought. We remain committed to an expeditious conclusion of the arbitration process,” an Amazon spokesperson said.

Future Retail is in huge debt, exacerbated by the shutting down of its retail stores across the country due to the COVID-19 pandemic. As per Reuters, the representatives for Future Group had argued in the SIAC that Future Retail Limited was at risk of going into liquidation. “If the disputed transaction falls through, FRL will go into liquidation. That will mean that the livelihoods of more than 29,000 employees of FRL will be lost,” they argued.

Future Retail has indicated that the deal will go through despite the order from SIAC. In a clarification note issued to the Indian exchanges a day after the SIAC ruling, Future Retail wrote that “the Company is not a party to the agreement under which Amazon has invoked arbitration proceedings.”

The media release by Future Retail is reproduced below:

“Future Retail Limited (FRL) has received a communication from the SIAC, enclosing an interim order of the Emergency Arbitrator in the arbitration proceedings under shareholders’ agreement between Amazon, Future Coupons Private Limited and the promoter group. FRL is examining the communication and the order. It may be noted that FRL is not a party to the agreement under which Amazon has invoked arbitration proceedings.

FRL has been legally advised that actions taken by the FRL / its board, which are in full compliance of the relevant agreements and eminently in the interest of all stakeholders cannot be held back in arbitration proceedings initiated under an agreement to which FRL is not a party.

As per the advice received by FRL, all relevant agreements are governed by Indian Law and provisions of Indian Arbitration Act for all intents and purposes and this matter raises several fundamental jurisdictional issues which go to the root of the matter.  Accordingly, this order will have to be tested under the provisions of Indian Arbitration Act in an appropriate forum.

In any enforcement proceedings, FRL would take appropriate steps to ensure that the proposed transaction will proceed unhindered without any delay.”

In a recent development, Future Retail had approached the Delhi High Court seeking relief from Amazon’s interference in its deal with Reliance Retail. It complained that Amazon was ‘misusing’ the interim order granted by the SIAC.

P.S. Read The Quint’s explainer on the entire issue here.