Firecrackers: To ban or not to ban 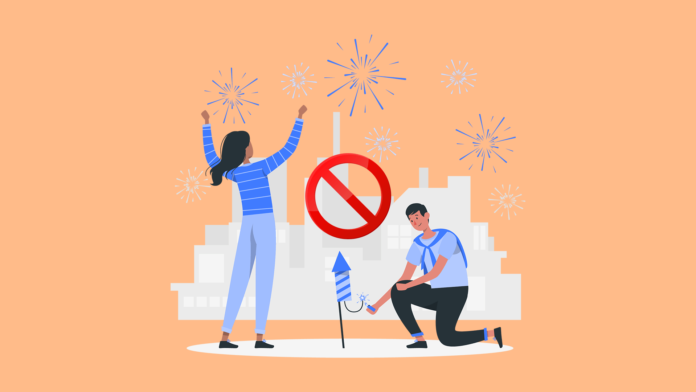 Every year around the time of Diwali (or Deepavali), there is a clamour to ban all firecrackers due to its adverse impact on our environment. This time is no different. Many states have already imposed a full or partial ban of firecrackers this Diwali, citing health concerns of COVID-19 patients, among others. But the bans are only imposed close to the festival days, the suddenness of which affects the businesses involved in firecracker manufacturing.

Sudden bans not a solution:

In its 50-Word Edit, The Print wrote that “NGT’s ban on sale and bursting of firecrackers shows, once again, the episodic, piecemeal manner in which governments and the judiciary tackle air pollution. Sudden bans not only catch the industry off guard, but also fail in enforcement. A larger policy on firecrackers, which addresses the problem nationally, is needed.”

Tamil Nadu manufactures about 90% of all firecrackers sold in our country. A ban on firecrackers impacts the livelihoods of more than 8 lakh people in Tamil Nadu. Appealing against the ban, the Chief Minister of Tamil Nadu Edappadi K. Palaniswami has written a letter to his counterparts in Odisha and Rajasthan. He said, “I would like to bring to your kind notice that Tamil Nadu produces mainly green crackers and therefore the question of environmental pollution does not arise. There is no empirical or validated data to demonstrate that the bursting of crackers has an effect on COVID patients. I, therefore, request you to reconsider your government’s decision to ban the sale and bursting of crackers in your State for this Deepavali season.”

Many questioned the suddenness of the ban only during the time of sales, considering that the firecrackers industry manufactures for 10 months and sells only for 2 months. The manufacturers also say that they have adhered to the 2018 Supreme Court ruling by converting to green crackers that are certified as ‘environment-friendly’. “The Environmental Protection Act states that any emission that gets dissolved in the atmosphere within 48 hours is not a pollutant. Studies have proved that fireworks are not all polluting”, said Indian Fireworks Manufacturers’ Association (TIFMA) general secretary T. Kannan.

Doctors across the country have noted the suspended particulate matter in the air due to bursting of firecrackers will severely impact COVID-19 patients and patients with sensitive lungs. An article in The Hindu quoted several doctors who advised against bursting firecrackers.

Even the so-called environment-friendly firecrackers have pollutants in them. The Supreme Court in 2018 had banned the use of barium nitrate (among other chemicals) in producing firecrackers because it produced poisonous fumes. But even after several research attempts, firecrackers without barium nitrate could not be viably produced. This meant that the ‘green’ crackers sold in the market today still contain the banned chemical.

In its recent order banning the sale and use of fire crackers during November 9 to 30 in areas where air quality is ‘poor’, ‘very poor’ and ‘severe’, the National Green Tribunal noted that “Financial loss or loss of employment cannot be a consideration not to remedy the situation affecting lives and health of the citizens by pollution, aggravated by Covid. While it is true that any restriction on sale and use of crackers may affect the business and employment, at the same time if use of crackers results in pollution and affects life and health of the citizens and the environment, such use may have to be restricted/prohibited to effectuate the ‘Sustainable Development’ principle of which ‘Precautionary’ principle is a part, as per mandate of Section 20 read with Section 15 of the National Green Tribunal Act, 2010. Citizens are entitled to breathe fresh air which right cannot be defeated on the ground that enforcement of such right will lead to closing of such business activity.”

P.S. NDTV has carried an article highlighting how the different chemicals present in firecrackers affect human health. Read it here.