Border dispute between Assam and Mizoram 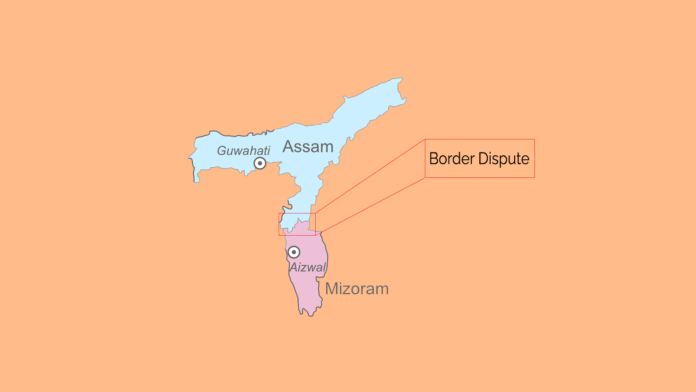 Assam and Mizoram have been involved in a border dispute over the last few days. On the night of October 17, 2020, violent clashes erupted at the inter-state border between people of Assam and Mizoram, leading to several injuries and damage to properties. The death of an Assam resident in Mizoram under mysterious circumstances on November 1, 2020, has caused more tension in the area. This has led to the blockade of National Highway 306, which is considered as the lifeline of Mizoram.

Mizoram’s civil society groups claimed that the clashes erupted after the Mizoram Reserve Battalion personnel on duty along the border were pelted with stones by group of miscreants from Lailapur, Assam. This followed an incident on October 9, 2020 in another border area, when a farm hut and a betel nut plantation owned by two Mizoram residents were set on fire allegedly due to an eviction drive conducted by the Assam government. The disputed land, which is claimed by Assam, has been historically cultivated by Mizoram residents.

People in Mizoram are looking at the clashes as a fight against illegal Bangladeshi migrants and not against Assam. The Indian Express quoted the president of the students’ union Mizo Zirlai Pawl, B Vanlaltana as saying that “Illegal Bangladeshis are creating all this trouble. They come and destroy our huts, cut our plants and this time pelted stones on our policemen.”

The article on The Indian Express further noted that “Mizoram believes the boundary should be demarcated on the basis of the 1875 notification, which is derived from the Bengal Eastern Frontier Regulation (BEFR) Act, 1873. Mizo leaders have argued in the past argued against the demarcation notified in 1933 because Mizo society was not consulted. MZP’s Vanlaltana said the Assam government follows the 1933 demarcation, and that was the point of conflict.”

Mizoram police officials have claimed that Intazul Laskar, the Assam resident who died in Mizoram, was a drug peddler and he succumbed to injuries after he fell into a gorge while trying to run away from members of Young Mizo Association, a local vigilante group. Mizoram civil groups are accusing the “illegal immigrants” in Assam for diverting the attention from the main border issue.

Assam Police officials have refuted the stone-pelting charges and instead claimed that unidentified persons from Mizoram had burnt shops and hutments along the National Highway 306 in Lailapur area of Assam. Assam government has claimed that after the clashes, the Mizoram police were deployed inside Assam’s territory.

Following the initial clashes, a school in Lailapur, Assam was bombed during one of the nights. Although no casualties were reported, Assam police officials noted that this was an attempt by miscreants to create panic among the locals. Additional Director General of Assam Police (law and order), GP Singh was quoted as saying that, “In investigation it has come and discussed with SP Kolasib, those triggering the explosion might be from Mizoram. We have discussed with police headquarters as it involves a case under Unlawful activities, we will request to transfer the case to a central agency.”

Assam government refuted the charges of its Mizoram counterparts that Intazul Laskar was a drug peddler. Claiming that Laskar was abducted by miscreants of Mizoram, the Assam government has asked for a probe by the National Investigation Agency (NIA).

The newly appointed Chief Secretary of Assam, Jishnu Baruah has said, “No one had any doubts as to what the Constitutional boundary was. Our official stand is that the Constitutional boundary of Assam is sacrosanct, and we will stick to that.” He also disclosed that central forces will be deployed in the border areas with Mizoram within a couple of days to restore normalcy in the area.