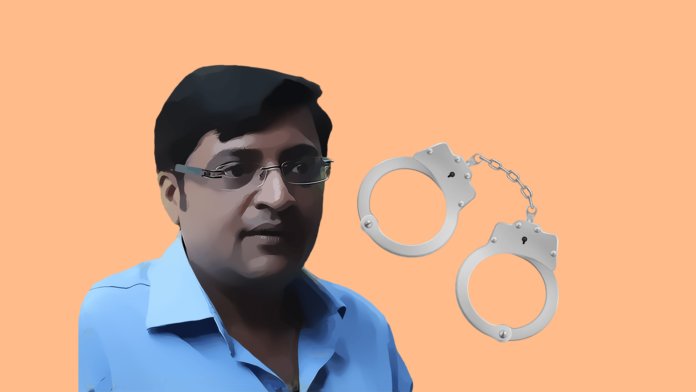 Arnab Goswami, the Republic TV Editor-in-Chief was arrested in Mumbai early morning yesterday on charges of abetment to suicide in a two-year-old case and sent to judicial custody for two weeks. In 2018, interior designer Anvay Naik, in a suicide note, accused Arnab Goswami and two others (Feroz Shaikh of IcastX/Skimedia and Niteish Sarda of Smartworks) of not paying dues worth ₹5.4 crores leading to non-payment of fees to his contractors. This, he alleged, was the reason for his and his mother’s suicide. Although the case was closed by Raigad police in 2019, Anvay’s daughter Adnya Naik had pleaded with the Maharashtra Home Minister to reopen the case in May this year.

Arrest is a misuse of power:

The arrest has been widely condemned by the press and the opposition parties in Maharashtra. The Editors Guild of India issued a statement expressing shock at the arrest of Arnab Goswami, saying “We condemn the sudden arrest and find it extremely distressing. The Guild calls upon Chief Minister of Maharashtra to ensure that Goswami is treated fairly and state power is not used against critical reporting by the media.” News Broadcasters Association put out a statement saying, “NBA is dismayed in the manner in which he was arrested. Even though NBA does not agree with his type of journalism, we denounce retaliatory action, if any by the authorities against a media editor.”

Several reporters and anchors from Republic TV’s rival news channels have also condemned the arrest. Many of them noted that even though they did not agree with Arnab’s style of news reporting, they questioned the dangerous overreach by the police and asked them to uphold the right to freedom of expression.

Union ministers from Bharatiya Janata Party were quick to condemn the arrest. Home Minister Amit Shah tweeted, “Congress and its allies have shamed democracy once again. Blatant misuse of state power against Republic TV & Arnab Goswami is an attack on individual freedom and the 4th pillar of democracy. It reminds us of the Emergency. This attack on free press must be and WILL BE OPPOSED.”

Information and Broadcasting Minister Prakash Javadekar tweeted, “We condemn the attack on press freedom in #Maharashtra. This is not the way to treat the Press. This reminds us of the emergency days when the press was treated like this.” Foreign Minister Dr. S. Jaishankar, Textiles and Women & Child Development Minister Smriti Z Irani were also among those who tweeted condemning the arrest of Arnab Goswami.

Law will take its own course:

Anvay Naik’s daughter Adnya alleged that the case was closed in 2019 without investigating the non-payment of dues by Arnab Goswami and others. Anvay’s wife Akshata Naik had tweeted, “Arnab Goswami is shouting for Sushant Singh Rajput’s suicide, but what about my husband and mother-in-law who suicided because of Mr. Arnab Goswami? What is happening to my case? When will justice be granted to our family? WHY STILL THERE IS NO ACTION?”

Shiv Sena, the ruling party in Maharashtra, justified the arrest and questioned BJP’s protests. “This case is not connected to the freedom of press in any manner. BJP workers and leaders are complaining as if Arnab Goswami is their functionary and he was falsely arrested. He has been arrested in the case for further investigation. Where does the question of freedom of press or arise in this?” asked Shiv Sena spokesperson Anil Parab.

The Congress stated that the law will take its own course and innocent people will not be punished. It also questioned the selective outrage of BJP. “I am shocked at the selective outrage of the BJP. Where were they when independent and fearless journalists were arrested? Where were they when Prashant Kanojia was arrested, where were they when sedition charges were imposed against journalist Supriya Sharma for showing the pathetic state of affairs in Varanasi? When a journalist reported on the PPE scam in Uttar Pradesh, an FIR is lodged against him instead of probing the scam. The BJP should be the last to talk about press freedom because of the way they try to control the media through advertisement, through intimidation and fear,” said Congress spokesperson and former journalist Supriya Shrinate.

P.S. The Indian Express carried a story from the perspective of the Naik family. Read it here.

Republic TV has accused the Naik family of fabricating facts. Its statement can be found here.