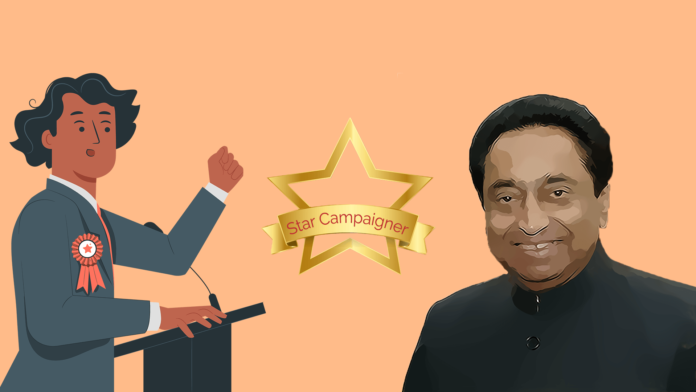 During campaigning for the recent by-elections to the Legislative Assembly of Madhya Pradesh, former Chief Minister Kamal Nath had spoken in a manner which were found to be violating the Model Code of Conduct by the Election Commission. Based on a series of complaints from the Bharatiya Janata Party (BJP), the Election Commission had revoked the ‘star campaigner’ status of Kamal Nath (expenses incurred by a ‘star campaigner’ will be borne by the political parties and will not be considered as poll expenditure of the candidates) on October 30, 2020. But the Supreme Court stayed the order of the Election Commission.

The Election Commission noted that the Model Code of Conduct provides that “no party or candidate shall indulge in any activity which may aggravate the existing differences or create mutual hatred or cause tension between different castes and communities, religious or linguistic.” The code also states that “parties and candidates shall refrain from criticism of all aspects of private life, not connected with the public activities of the leaders or workers of the parties.”

Kamal Nath had triggered a controversy when he called the rival BJP’s woman candidate an ‘item’. The Election Commission stated that Kamal Nath’s response for its question on his remark was ‘not found to be satisfactory’. The BJP had also complained that Kamal Nath had made derogatory remarks about the current Chief Minister of MP Shivraj Singh Chouhan on October 13, 2020, when he said (in Hindi), “Shivraj is a gimmick artist, he should go to Mumbai and start acting.” While going through the speech transcript of that day, the Commission found that Kamal Nath had also attacked Shivraj Singh Chouhan by calling him a ‘mafia’.

Noting that political parties are expected to behave in a dignified and ethical manner, the Commission observed that Kamal Nath had repeatedly violated the Model Code of Conduct. In view of this, it issued an order revoking the ‘Star Campaigner’ status of Kamal Nath. “If any campaign is done by Shri Kamal Nath from now onwards, the entire expenditure related to travel, stay, visit, etc., shall be completely borne by the candidate in whose constituency the campaign is done by Shri Kamal Nath,” the Commission ordered.

In his reply to the Election Commission regarding the ‘item’ remark, Kamal Nath said that the context in which the word was used has been misunderstood. He wrote, “If the Election Commission replays the entire speech made on 18.10.2020, it would understand that there was neither any ill will nor malice during the entire speech. The speech is a castigation of the theatrics of the BJP and its leaders.”

Later, Kamal Nath moved the Supreme Court against the Election Commission’s decision to revoke his ‘Star Campaigner’ status. Through his advocates, he quoted instances of BJP leaders using crass language and accused the Commission of remaining mute in those instances. He urged the Supreme Court to stay the EC’s order, stating that it was his party’s prerogative to remove his name as a star campaigner and not the EC.

Kamal Nath, noting that there has not been a single allegation against him of misconduct against women during his political career, he said, “Honour, dignity and safety of women have been one of the paramount pillars of my work as a Chief Minister, Union Minister and Member of Parliament since 1980 onwards.”

After hearing the case, the three-judge Bench of the Supreme Court headed by Chief Justice of India Sharad A. Bobde stayed the Election Commission’s decision to revoke ‘Star Campaigner’ status of Kamal Nath. “Who gives you the power to determine who is the leader of the party. We are staying this order. You have no power,” Chief Justice Bobde told the Election Commission.

P.S. India Today has an explainer on the definition of a ‘Star Campaigner’ and the benefits associated with it. Read it here.