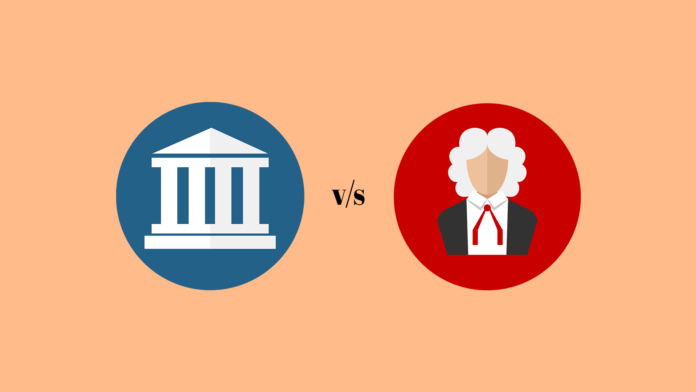 Andhra Pradesh Chief Minister Y.S. Jaganmohan Reddy wrote a letter to the Chief Justice of India S.A. Bobde accusing Supreme Court judge N.V. Ramana of corruption and his alleged conspiracy against Andhra government on behalf of Telugu Desam Party (TDP) chief N. Chandrababu Naidu. Justice N.V. Ramana is next in line to be the Chief Justice of India from 24 April 2021. The explosive letter and its allegations have caused a storm in the judiciary.

Dated October 6, 2020 and distributed to the media during a press briefing by the Andhra Pradesh government on October 10, 2020, the letter exposes serious charges of impropriety against Justice Ramana. The letter claims that the two daughters of Justice Ramana were “beneficiaries of various questionable transactions of land within the area which came to be eventually notified as a location of the new capital proposed by Shri Chandrababu Naidu.” The transactions, noted the letter, were routed through Dammalapati Srinivas (then Additional Advocate General of AP) allegedly due to the nexus between Srinivas, Justice Ramana and Chandrababu Naidu. Pertaining to the allegations of corruption in land deals against Chandrababu Naidu and others, the Chief Minister noted that he had recommended a CBI inquiry to quell any notions of political motivations by the state government.

Citing the order passed by Andhra High Court on the stay of investigation in the FIR against Srinivas and the gag order on the media, the letter accused Justice Ramana of influencing the sittings of the High Court on matters important to the Telugu Desam Party and alleged a nexus between Justice Ramana, TDP and a few judges of the Andhra Pradesh High Court.

An article in Scroll.in website noted that the “court’s reputation as far as dealing with allegations against sitting judges is already at a low”. It cited instances where the process of looking into such allegations were opaque, including the case of accusation of sexual harassment against the then chief justice Ranjan Gogoi and the accusation against powerful elements gaming the registry of the court.

The allegations in the letter warrant a serious investigation. It is important to protect the integrity of the judiciary by swiftly investigating the issues of impropriety against the sitting judge of the Supreme Court.

The Supreme Court Bar Association (SCBA) and the Delhi High Court Bar Association (DHCBA), among others, have denounced the inflammatory letter by the Andhra Pradesh CM to the Chief Justice of India. Condemning the action by the Andhra CM, the SCBA noted that such “actions by constitutional functionaries are opposed to conventions causing serious inroads impacting the independence of the judiciary as enshrined in the Constitution of India.” The DHCBA noted in its resolution that the “writing of the said letter and its circulation in public domain is clearly a dishonest attempt at overawing the independence of judiciary and tantamounts to contempt of the Hon’ble Court.”

Justice Ramana heads the bench hearing a petition to fast track pending criminal cases against former and current legislators. Andhra Pradesh CM Jaganmohan Reddy has a slew of corruption cases against him. The Indian Express noted in an article that “the CBI’s primary charge against Jaganmohan Reddy was that he influenced his father – when he was CM from 2004 to 2009 – to issue orders that favoured some private companies and individuals by granting mining leases or land at cheap rates, who, in turn, invested in Jaganmohan’s businesses in a quid pro quo arrangement.” The article further states that several cases against legislators had been stayed by superior courts and that Justice Ramana’s bench had “asked High Court Chief Justices to constitute a Special Bench to monitor the progress of trial of these cases and to “forthwith” list all such cases which have been stayed and decide whether the stay should continue or not.”

In fact, the CM’s letter to CJI was released the very next day (on October 10, 2020) after the resumption of proceedings against the CM in the disproportionate assets case in the CBI special court in Hyderabad on October 9, 2020.

P.S. The Hindu has an explainer on how the Chief Justice of India can handle this case through an in-house procedure. It is an interesting read on how cases against judges are dealt with. Read it here.