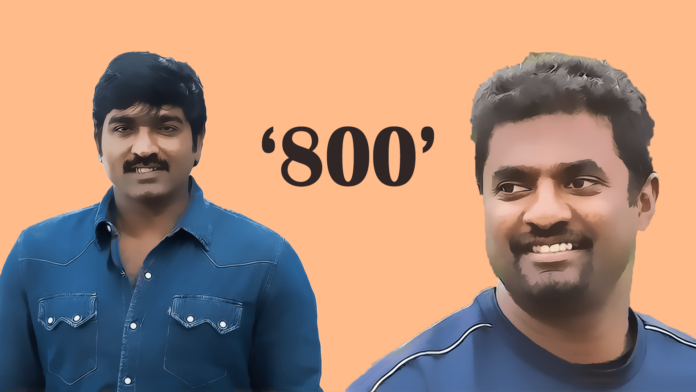 Earlier this week, the motion poster for Muthiah Muralidaran’s biopic titled ‘800’ was released. The Sri Lankan ex-cricketer’s role will be played on-screen by Tamil actor Vijay Sethupathi. Soon after the launch of motion poster, several members of the film fraternity, politicians and Twitterati have asked Vijay Sethupathi to withdraw from the film. It has become a major talking point, especially in Tamil Nadu.

Biopic is an insult to Tamils:

Many people have raised objections to the movie due to the alleged indifference of Muthiah Muralidaran during the Sinhalese persecution of Tamils in Sri Lanka. Muralidaran’s forefathers hailed from Tamil Nadu, and hence he was expected to raise his voice against the atrocities being meted out to his fellow Eelam Tamils (Sri Lankan Tamils).

Veteran movie director Bharathirajaa penned an open letter to Vijay Sethupathi asking him not to portray the role of Muralidaran. “Although he has achieved a lot as a sportsperson, what is the use in achieving them when he laughed and enjoyed while his fellow countrymen were murdered? The Tamil people have overcome several treacheries. As far as we are concerned, Muthiah Muralidaran is a traitor”, he wrote.

Several political leaders in Tamil Nadu have also joined the chorus in asking Vijay Sethupathi to drop the film. MDMK leader and Rajya Sabha MP Vaiko noted that when Sri Lankan Tamils who lost their relatives during the civil war sat on fast and protested, “Muralidaran said they are doing drama”. PMK founder S Ramadoss put out a statement saying that Vijay Sethupathi would be branded as a betrayer if he acted in the film.

Twitter was also abuzz with opposition to the movie. Some asked Vijay Sethupathi how he could don the white jersey with the Sri Lankan flag on it, when the Sri Lankans had committed genocide against the Eelam Tamils. Few others asked if India would accept a Pakistani cricketer’s biopic being made in our country.

Support for the movie:

“Do not mix sports and politics” seems to be the refrain from supporters of Vijay Sethupathi. The life of Muthiah Muralidaran, from his struggles as a member of the minority community to his achievements in the cricket field, is an inspiration for aspiring sportspersons. The actor in Vijay Sethupathi is only doing his job by playing the role of the legendary cricketer.

Dar Motion Pictures, one of the producers of the movie, has released a statement on the issue. “800 is purely a sports biography film about the legendary cricketer Muthiah Muralidaran. The film is a journey about a man who hails from the Tamil migrant community, going on to become the highest wicket taker of all time. The film does not make any political statement favouring any community”, the statement read. It further noted that the film “will not showcase any scenes that would belittle the struggles of Eelam Tamils in Sri Lanka or hurt their sentiments in any way. On a positive note, the film will engage the Tamil film community in Sri Lanka providing the artists and technicians a platform to showcase their talents on a global stage.”

Some people on Twitter pointed out that if an Englishman (Ben Kingsley) could act as Mahatma Gandhi in a movie, there was nothing wrong in Vijay Sethupathi playing the role of Muthiah Muralidaran.

P.S. The Hindustan Times interview with Muthiah Muralidaran sheds light on his support for the Rajapaksa family, who are accused of alleged human rights violations during the civil war in Sri Lanka.