Central Vista Project: To rebuild or not? 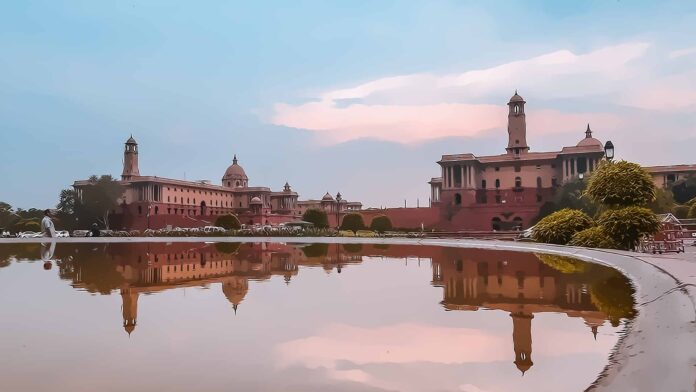 The Union government had announced that Prime Minister Narendra Modi will lay the foundation stone for the new Parliament building of the Central Vista Project on December 10, 2020. The Supreme Court, while allowing the ceremony to occur, halted any construction or demolition work until a bunch of pleas against the entire project is decided. What is the Central Vista Project and why is there an opposition to it?

The Central Vista of New Delhi runs from Rashtrapati Bhavan to India Gate. It houses several buildings apart from the Rashtrapati Bhavan and India Gate, including Parliament House, North Block, South Block, National Archives among others. In October 2019, the Housing and Urban Affairs Minister Hardeep Singh Puri announced the Centre’s ambitious plans for redeveloping and modernizing the Central Vista.

The Central Vista Redevelopment/Development Project plan included the construction of a new Parliament House, a residential complex near South Block that could provide housing for the Prime Minister and Vice-President, buildings to house Central Ministries and the chambers of all Members of Parliament, among others. Some existing buildings will be demolished, which include the Shastri Bhavan, Krishi Bhavan, Nirman Bhavan and Vigyan Bhawan.

In a press release issued by the Ministry of Housing & Urban Affairs, the government explained, “The buildings on Raisina Hills were constructed in the period from 1911 to 1931, designed by Sir Edwin Lutyen and Sir Herbert Baker.  At that time also these were designed to have office for viceroy & Secretariat.  The Parliament building was constructed in the same period. Various buildings along Rajpath have been constructed at different stages for accommodating offices of various Central Govt. Ministries and Departments. The Central Vista starting from Rashtrapati Bhawan upto India Gate is the heart of city which has been point of attraction for visitors from all over the world.”

It added further, “Over a period of above 100 years after the conceptualisation of building on Raisina Hill and adjoining to Rajpath, the requirement has now increased manifold.  These buildings designed earlier are not now able to provide enough space, amenities and comfort requirement.  The requirement of safety standards has also got improved.  In terms of offices, now more space is required to accommodate all Central Govt. offices at nearby area.  Due to delimitation, more Nos. of MPs may be there in future and hence more space is required for them.  Even for present MPs, the space and amenities required is quite insufficient in Parliament House. Lots of visitors come to Central Vista from India & abroad and there is an imperative need to improve the beauty of Central Vista to make it a world class tourist attraction point.”

In an affidavit filed before the Supreme Court, the Central Public Works Department (CPWD) claimed that the Central Vista Project will lead to savings of annual rent expenditure of ₹1,000 crore. It further stated that the current Parliament House is not earthquake-proof and does not satisfy modern safety measures.

Responding to a question in the Rajya Sabha, Minister Hardeep Singh Puri said, “Over the years, the parliamentary activities and the number of people working therein and visitors have increased manifold. Hence, the building is showing signs of distress and over utilization. Further, with the reorganization of constituencies [to be held in 2026 which will increase the number of MPs elected to the Parliament], the number of Lok Sabha seats is likely to go up and the present building does not have any space to house any additional member.”

The key concerns of critics against the Central Vista Project include the haste with which the project is being implemented, and the veil of secrecy over the processes followed. The entire project is expected to be completed by 2024, just in time before the next general elections.

The project is estimated to cost a whopping ₹20,000 crores. In the current scenario, with the economy in technical recession and millions of people suffering physically and financially due to the COVID-19 pandemic, critics are questioning the need to implement the project within such a short span of time.

An architect, writing in The Hindu, said, “In a project of national significance, the government felt it owed no explanation to the public for either the process followed, or the criteria for selection. No exhibition of the proposed buildings was held, no data revealed, no models or drawings displayed so that citizens may comprehend the full scope of such a monumental change proposed in the city’s most visible public space and a space of national significance.” He further wrote, “On April 22, the new Parliament building was granted environmental clearance from the Ministry of Environment, Forests & Climate Change. Without an environmental impact study, and despite over 1,200 recorded objections raised by citizens, the Central Vista Committee headed by the CPWD — despite the conflict of interest — issued a ‘No Objection’ certificate.”

Critics also argue that the heritage status of the Central Vista will be compromised. The National Alliance of People’s Movements, a civil rights network, wrote, “The Central Vista Project also violates provisions of the 2003 UNESCO Declaration concerning the ‘Intentional Destruction of Cultural Heritage’, to which India as a member state, is a signatory. Infact, what is not widely known is that an earlier proposal by the UPA Govt. in Jan 2014 to UNESCO to grant World Heritage Site status to “Delhi’s Imperial Capital Cities” was ‘withdrawn’ by the Modi Govt, without specifying any reason. It is not hard to understand why, since this regime did not want any questioning of the mindless tinkering of heritage sites of historical value by the world body.”

The architect who won the bid for the Central Vista Project is known to be a favourite of Prime Minister Narendra Modi. Read his profile here.