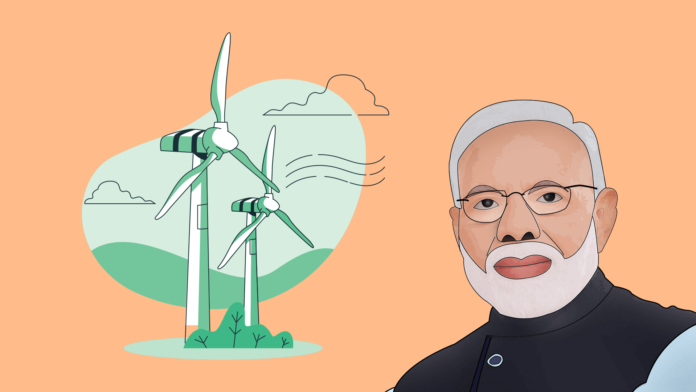 Last Friday, Congress leader Rahul Gandhi shared a video on Twitter in which Prime Minister Narendra Modi was interacting with Vestas (wind turbine maker) CEO Hendrik Anderson. During the conversation, Modi suggested using the wind turbines not just to generate electricity, but also to extract drinking water from moisture available in the air. He also asked Anderson if after further scientific research oxygen can also be extracted from the air through the wind turbine. Rahul Gandhi had mocked at these suggestions from PM Modi.

During the interaction, the tone and tenor of PM Modi’s message (spoken in Hindi) clearly pointed out that he wanted Vestas (and other companies in the sector) to do more scientific research on his suggestions. Although he suggested using a single wind turbine to generate electricity, water and oxygen, towards the end of his speech, he asked Anderson if the scientists in his firm could innovate and bring this idea of a 3-in-1 wind turbine to life.

The idea of converting moisture in air to potable water has already been practically demonstrated in the past by a French engineering firm called Eole Water. In the year 2012, CNN had published an article about this firm’s wind turbine that ‘creates water from thin air’. The article quoted Thibault Janin (Director of Marketing at Eole Water) as saying that the firm had developed a working prototype which was 24-metre tall which produced 62 litres of water an hour. Although the brand no longer exists currently (reason unknown), the technology has been sufficiently demonstrated.

Although no technology demonstration has been specifically done to retrieve oxygen from air through wind turbines, pure oxygen can be extracted from air currently using methods including fractional distillation and vacuum swing adsorption.

The interaction with Vestas CEO was an opportunity for PM Modi to suggest some innovative ideas that the firm could work on. Creation of a 3-in-1 wind turbine (at nominal costs) would be a huge deal for a country like India. By exhorting one of the largest wind turbine manufacturers in the world to focus on research that would bring such an idea to life, PM Modi has thrown a challenge to the industry to develop alternative and sustainable avenues of producing drinking water and oxygen.

The video shared by Rahul Gandhi had accompanying text written by him, which seemingly mocked PM Modi’s suggestions. It read, “The real danger to India isn’t that our PM doesn’t understand. It’s the fact that nobody around him has the guts to tell him.”

The Hindu carried an article quoting some experts suggesting that the ideas of PM Modi were ‘impractical’. The experts had noted that “moisture in turbines worked to the detriment of blades, and there were simpler alternatives to extracting water than from running a turbine.” Another expert added, “Too much moisture would be corrosive, too little would make it inefficient for the purpose of trapping condensate. However, far more energy would be expended in extracting too little water. It’s a technology demonstrator but not something that can be realistically implemented anywhere.”

Eola Water does not exist anymore. This suggests that although the technology was demonstrated, the market was not ready for it due to various reasons. One such reason could have been the cost. In 2012, the cost of a single Eola Water turbine ranged between $660,000 and $760,000. Many considered the cost to be prohibitively high for a sustainable business.

Extraction of pure oxygen is also a very costly process. An article in The Wire suggested that PM Modi’s ideas were technically feasible, but difficult to implement at scale. It noted, “Their large-scale test and implementation within the constraints of present-day engineering and technology have not been validated at a significant scale. And even if technologies could be realised, again in principle, Modi’s idea of generating oxygen using wind turbines would be even more cumbersome to implement, with few benefits of any kind.”